Geophysics light up Sun for Valhalla

Geophysics indicate that the deposit outlined so far could be the tip of the VMS iceberg at Sun. 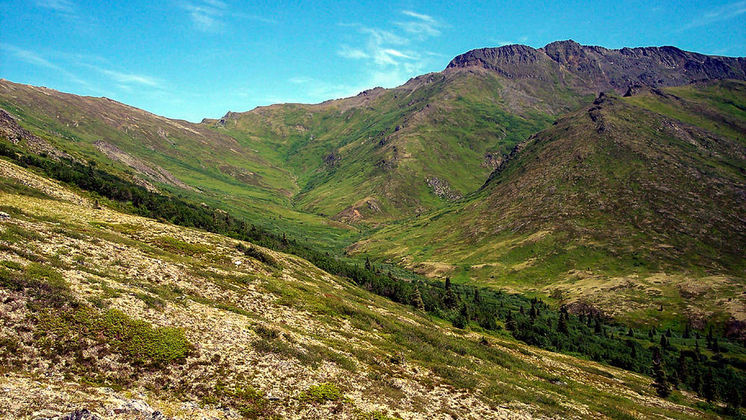 Looking north toward Sun, a 10.7-million metric ton VMS deposit rich in zinc, lead, copper and silver. While this deposit does reach the surface on the east side of the creek, there are very little indicators of the rich mineralization found there.

Valhalla is a private Alaskan mineral exploration company formed in 2018 by a team of geologists and industry professionals to acquire and explore Sun and potentially other projects in the Ambler district and across the state.

With 10.73 million metric tons of resource averaging 10.97 percent zinc-equivalent – calculating the value of all the metals in both resource categories – Sun hosts the size and grade to be deemed a major VMS deposit.

Now, geophysics indicate that the deposit outlined so far could be the tip of the VMS iceberg at Sun.

Formed on the ocean floor as black smokers billowing out sulfides, VMS deposits tend to be three- to 10-meter thick bands often rich in base and precious metals. Because they are relatively thin and tend to get bent, broken and folded by plate tectonics, these deposits are not always easy to find.

Even large VMS deposits such as Sun are not readily noticeable on the surface.

“There is not a lot of outcrop here that you can lay your fingers on and say, ‘that’s the occurrence,'” Valhalla Metals President Curt Freeman said during a Nov. 6 presentation at the Alaska Miners Association 2019 convention in Anchorage.

The rich concentrations of metals, however, make these deposits highly conductive and geophysics is a great way to trace them below the surface.

Trilogy has already identified one world-class VMS mine project on its property, Arctic, and flew the geophysical survey to prioritize the roughly one dozen other historical deposits and occurrence in the Ambler VMS belt that spans the property for follow-up drilling.

Sun is part of this same belt of rocks but just east of the UKMP property. Valhalla jumped on the opportunity to take advantage of having the equipment and expertise already in the area and extend the survey over Sun.

“We were lucky enough to be able to tag onto the end of that,” Freeman said.

And the geophysics lit up an area dipping southeast from the Sun deposit that, if it represents a continuation of the layers of VMS mineralization already tapped by drilling, could expand the resource by several times.

“I am not here to tell you ‘I know its conductive and that means its metal’ – there are lots of things that could be conductive including the carbonaceous units – but that is a first-class drill target!” Freeman said.

To provide some sense of the size potential of this target, the Sun deposit extends to a depth of 200 meters, the much wider and stronger geophysical target extends 900 meters further down-dip of the resource.

If this conductive target down-dip from Sun turns out to be a continuation of the zinc-rich VMS mineralization outlined so far, Sun has the potential to rival Trilogy Metals’ Arctic deposit in terms of size.

And a cross section of the geophysics shows another four large conductive targets extend some 5,000 meters further southeast, which could represent additional expansions of the VMS horizon at Sun. 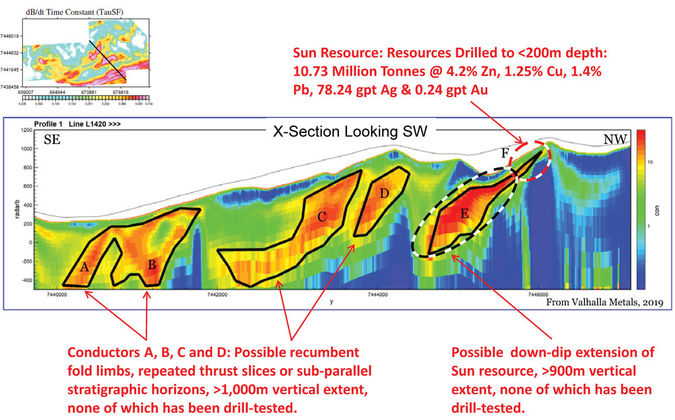 This cross section from the electromagnetic geophysics flown over Sun earlier this year shows the deposit (circled in red and white) and a much larger anomaly extending 900 meters down-dip (circled in black and white).

“I don’t think it is a stretch to think we can grow this significantly,” said Freeman. “Will we get to Arctic scale? I can’t say that, but I can’t tell you we won’t.”

Currently in the final stages of permitting, the Ambler Road would run right across the Sun property on its way to Trilogy’s world-class Arctic and Bornite deposits.

“We would have a road that is literally right down the hill from the resource on the Sun project,” Freeman said.

In the meantime, Valhalla has some compelling drill targets with the potential to substantially expand Sun between now and the time a road is built across the property.

Geotech is the largest privately owned Airborne Geophysics Company in the world.