TORONTO, ONTARIO–(Marketwired – July 12, 2016) – Eastmain Resources Inc. (“Eastmain” or the “Company”) (TSX:ER) is pleased to announce a $1.3 Million exploration program at the Eastmain Mine Project, including the Ruby Hill East and West properties in Quebec’s James Bay gold district. The planned 2016 exploration program will consist of mapping and prospecting, 3,700 metres of mechanical trenching, and approximately 5,000 metres of drilling. 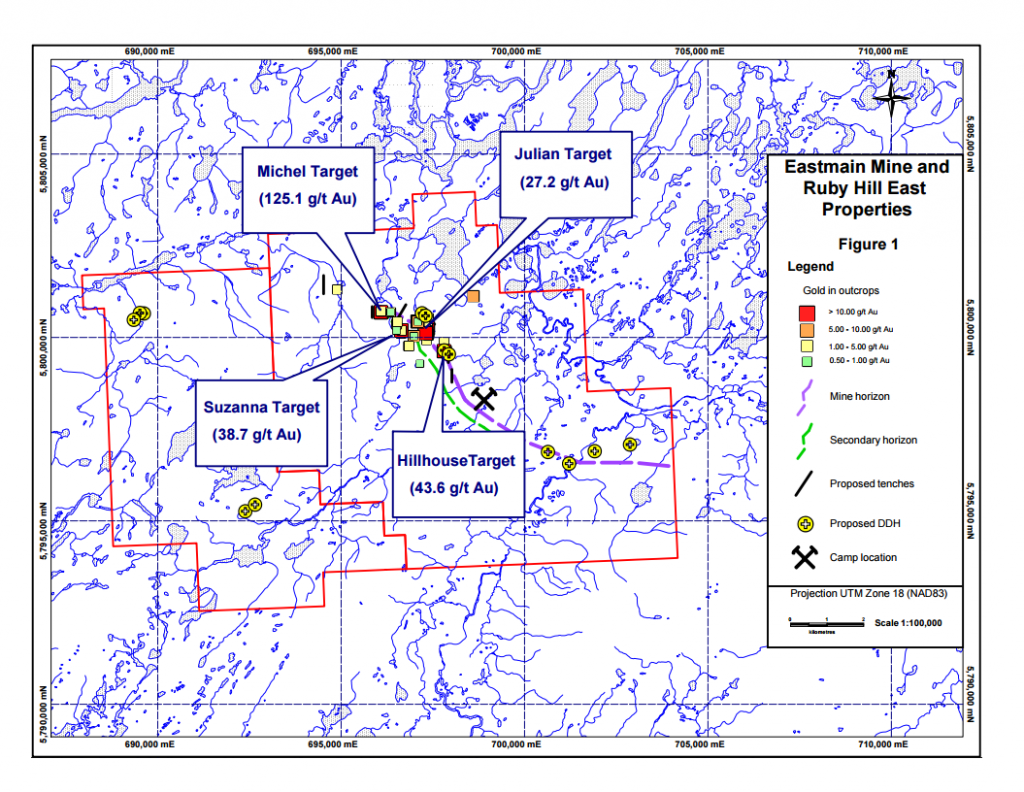 Claude Lemasson, Eastmain President and CEO commented, “The Eastmain Mine Project and the Ruby Hill East and West Blocks are significantly under-explored. We are focusing the bulk of our exploration efforts on understanding the 10 km NW trending mine horizon within the Eastmain Mine Project, which we believe may repeat on the Ruby Hill East block. The mine horizon includes a historic resource over 2 km, as well as high-priority drill targets. Through systematic trenching and drilling, we aim to enhance our current understanding of several of the mineralized structures on these properties to better define the resource potential.”

Prospecting will follow up on 15 identified targets located within highly prospective geological units associated with the ultramafic sequences on the Eastmain Mine, Ruby Hill East and Ruby Hill West claims. The targets were identified by Diagnos Inc., who conducted a regional Computer Aided Resource Detection System (“CARDS”) analysis in early 2016. The system uses pattern recognition algorithms to analyse compiled digital exploration data, and to identify areas with similar geological signatures to known areas of mineralization. The CARDS system identified the gold exploration targets and will be prospected by Diagnos in coordination with, and supported by Eastmain staff. 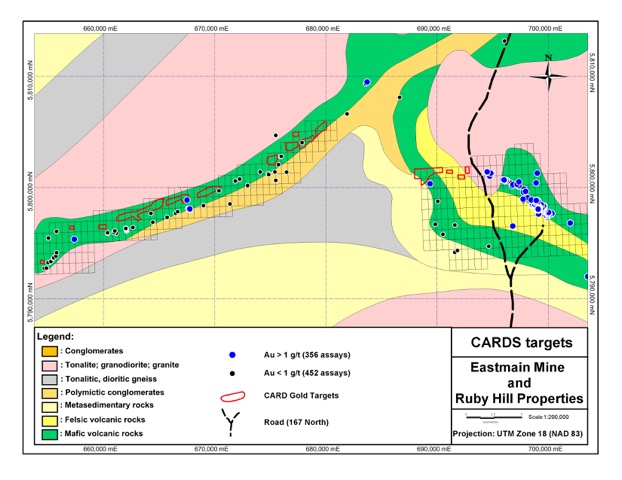 Mechanical Trenching, set to begin in late July, will follow up on previously defined high grade gold surface showings (see press release dated, September 26, 2014) and VTEM electromagnetic conductors. Specifically, trenching will focus on the outcropping Julian, Suzanna, Michel and Hillhouse targets, which present similar Au-Ag-Cu mineralization, characteristic of Eastmain’s past-producing A and B zones. Hillhouse and Julian targets coincide directly with the northwest extension of the projected Eastmain Mine package, while Michel and Suzanna are located along a secondary parallel structure, interpreted to be a repetition of the mine sequence immediately west of the main feature.

Drilling is set to begin in late August with up to 17 short diamond drill holes over approximately 5,000 metres in the Eastmain Mine block and the Ruby Hill East block. Drilling will follow up on the initial phase of the exploration program, which includes surface sampling and mechanical trenching.

The company is initiating a full assessment of the Eastmain Mine project. This assessment includes a review of the historic resources and of the site infrastructure and conditions, which will help to determine future exploration and development programs on the property. It is expected to be completed by the end of the year. Read the press release here.